Sitting across from the executive on the fiftieth floor of the high rise in New York City, Derek’s hands were sweaty with anticipation. This was the final stop on his whirlwind day of interviews with one of the most prestigious investment firms in the Wall Street district. Everything had gone as well as he could have hoped. But, he knew that the ultimate decision concerning his prospective employment lay in the hands of the person sitting across from him.

Peering over his half-moon spectacles while carefully considering his notes, pondering the myriad of responses provided by Derek over the course of the day, the CEO reached across the mahogany desk separating the two and extended his right hand. “Derek, I think you are exactly the type of ambitious individual that this company needs. Welcome to our team.” Involuntarily, a genuine smile of satisfaction spread across Derek’s face, “Thank you sir. I really appreciate this opportunity,” replied Derek with a firm handshake to accompany his confident words.

Derek had been working towards this very moment for the past six years – perhaps much longer. Living in a small suburban town just outside of Chicago, Derek completed his MBA just three weeks prior – the last step in preparation for a life on Wall Street and all the perks associated with it. From his earliest childhood memories, Derek was consumed with numbers, trends, data, and the detailed analysis of it all. Most kids opened the newspaper and flipped straight to the comics. Derek, however, stopped at the business section, perusing the trends on his favorite stocks, always on the lookout for the next ticker symbol equipped to surpass street expectations.

As the floor number displayed inside the elevator approached the lobby level, Derek’s thoughts were already shifting towards his next ambition. He always dreamed of owning a penthouse overlooking Central Park with the finest art hanging on its walls. Numbers and fine art, they were the two things in Derek’s life that stimulated him more than anything else. As diametrically opposed as they were – art and math – his natural ability in one allowed him to enjoy the other.

To anyone who witnessed Derek strolling through the lobby, they would have thought him to be a seasoned veteran at the firm. The fine Italian suit, the wavy yet slicked back hair, the black wing-tipped shoes, and most importantly the confident gait was proof positive that Derek belonged in this atmosphere – on the surface, at least. Looks can be so deceiving.

Walking out of the quiet lobby and on to the sidewalk, the hustle and bustle of the Big Apple burst into action. The constant motion, honking horns, and murmur of shuffling footsteps was intoxicating to Derek. He felt at home around the busyness of big city life. The knowledge that this was now his new home brought upon a wave of euphoria. The scent of fresh hot dogs from the sidewalk vendor added to his feeling of exhilaration. In a seemingly underwhelming celebration, Derek had promised himself a genuine New York hot dog to christen his official acceptance into the city that never sleeps. 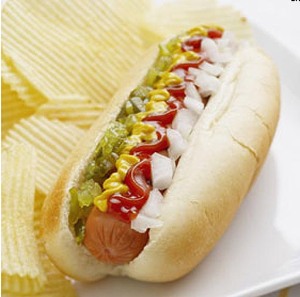 Stepping up to the gentleman situated under the faded umbrella, Derek barked out his order as if already a weathered New Yorker, “One dog – onions, relish, mustard, and ketchup.” Exchanging a few dollar bills for his celebratory meal, Derek ambled towards the bench beside the bus stop. Seated at the end of the bench was an older gentleman with unkempt facial hair and a hoodie pulled over his thinning gray hair. The old bike leaning precariously next to him had a basket on the front – in it were a bushel of apples and a few ears of corn still in their husks. He held in his one hand a tattered notepad, in the other a partially sharpened pencil.

Setting the hot dog beside him on the bench, Derek pulled out the ringing cell phone from his pocket. The incoming call was from his girlfriend, Missy, back in Illinois. The first words he heard were characteristic of his longtime partner, “So, are there Broadway shows in our future?” She was both witty and confident. Their relationship was proof that sometimes it was likes, not opposites that attract each other. The next several minutes involved congratulatory remarks, shared dreams and aspirations for a new lifestyle supported by a six figure income north of a half million dollars per year. By the sound of the conversation occurring between the two, it appeared that their first years’ worth of income – and then some – had already been spent.

“Miss you lots, love you more, see you soon.” It was their signature communication that was unique to them. As he pressed the button to end the call, he slipped the phone back into his pocket. Sinking his teeth into the hot dog, he couldn’t help but let out a sigh of contentedness through his nose while he closed his eyes and absorbed everything he had been dreaming of for so long. It was now becoming reality. He was the new dog on the block, and he was poised to establish himself as the next alpha male in the financial district.

What Derek failed to notice was the furious scribbling that the elderly gentlemen had been penning on his notepad throughout his conversation with Missy. What also eluded his attention was the wallet that had come out of the pocket with his cell phone, resting beneath the bench he was seated on. The hustle and bustle of New York City seems to accelerate everything. There was no exception in this situation. The wallet sitting beneath him was there no more. Derek was completely unaware of its disappearance. As it turned out, Derek was unaware of so much more.

Author’s Note: This is the first part of a three part short story. Please stay tuned for the next chapter to be published next week. Thank you for taking the time to read and comment – best wishes for an inspired day!