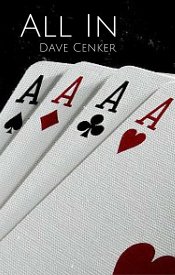 Ray looked across the table. Shuffling the deck of cards, his eyes remained locked on mine. I knew his plea wasn’t referring to another hand of poker. That’s the way it was with Ray and I. We knew what the other was thinking without saying a thing.

A slight nod signaled my consent. When at an impasse, everyone else in the world turned to a quick game of rock/paper/scissors. For Ray and me, it was poker. Five cards were dealt to each of us. Fanning my cards out, the full house with aces high left me confident that I wouldn’t be subjected to Ray’s proposal.

Setting my cards face up on the table, Ray’s initial facial expression left no hint as to the outcome of our duel. The emerging smirk on his face along with the royal flush that followed suit secured my fate.

“Last time, right? I’m supposed to be on the straight and narrow once I’m married.”

“Last time,” Ray assured me. “This one will be a breeze. The super only wants a ten percent cut in exchange for the master key.” Ray slid the brass key across the table to me.

It’d become an addiction, pilfering the apartments for small items that owners wouldn’t miss, but could be pawned for some decent cash. Ray used his position as general contractor to scout out potential targets. I’d sweep in later and snag the goods when the owner was not at home.

I was done with the entire thing. I’d be marrying Julie in two weeks. She’d changed me for the better. I’d always be grateful, even if I couldn’t thank her for it. I couldn’t expose that negative side of my being to my future wife.

Later that afternoon, my phone rang.

It was that short. Like I said, we could easily complete each other’s thoughts.

I slipped through the hallway inconspicuously. Glancing left, then right, I slipped the master key into the lock.

Easing myself into the apartment, I quickly moved towards the kitchen. The high end utility knife was our most ambitious target to date. Its absence would be noticed. Since this was the last time, however, it was well worth the risk. It would pocket us nearly two Ben Franklins.

It wasn’t where Ray said it was supposed to be. Something wasn’t right. It was against our code, but I had no choice but to call Ray.

“Yes, it is. In the drawer below the mixer.”

“Where are you exactly?” The tone in Ray’s voice was disconcerting.

“Not seventy. 7-T, on the top floor. Get outta there. You’re in the wrong place.”

Julie agonized over the decision. She wasn’t proud that her brother was a recovering drug addict. But, he was making amends and getting his life back on track. Julie was happy to watch James’ golden lab while he was helping at the halfway house for the week. She knew that Sean, her future husband, deserved to know the truth. She’d tell him everything this evening over dinner.

The envelope on the counter was addressed to James Reilly. Same last name as Julie. The picture resting beside the envelope confirmed my anxious suspicion. As the rightful key unlocked the apartment door, a realization of the circumstances about to unfold paralyzed me.

In poker parlance, I knew I was all in. My cards were on the table, and I had no choice now but to play them. I’d have that opportunity to thank Julie for all she’d done for me. Whether she’d believe me, or even be willing to listen, was a different matter altogether.

Author Note: Thanks, as always, for taking the time to read and comment. It’s in the sharing each other’s stories and thoughts that we become something more than the sum of the parts. The transition to my new author website is progressing and scheduled for going live in a couple weeks. To make sure you stay connected and continue to receive these (#FlashFictionFriday) stories to your inbox, please sign up to be a part of my author community. You will receive two previously unpublished stories as a small token of my appreciation (one now and another one once the new site goes live). As always, inspire and be inspired!