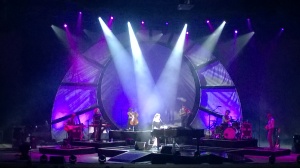 There are points in our life that we find ourselves on a precipice, teetering back and forth. A battle ensues between the rational mind and the impassioned heart. Step back toward solid ground, implores the sensible intellect. Take the leap, begs the courageous soul. Back and forth the maelstrom intensifies, leaving our physical presence stagnant. Disarray, chaos, and confusion suffocate what seems like the last breath of fresh air waiting to be exhaled from our lungs. Until the tiniest of nudges sends us over the edge, tumbling into uncharted territory. And suddenly it feels beautiful.

I pen these words in a moment of faith and hope. It has been less than forty-eight hours since I was coaxed into the dark abyss of the unknown. I want to give these emotions time to evolve, to come of age in my soul. I feel them intensifying. I don’t want to bring them into this world before their time. And yet, neither do I want to lose the rawness of those same emotions. I have decided that now is the time, the perfect time.

Traveling north on the interstate, my destination is St. Augustine Amphitheater for the second time in as many months. I have a peculiar habit of listening to the music I am going to hear live while driving, a concert before the concert, if you will. Streaming from the speakers in shuffle mode is a combination of perfectly produced studio recordings alongside the imperfections and subtle nuances that can only be captured in a live recording. The anticipation of a concert experience I had been looking forward to for months had me wanting to press down on the accelerator of my Mustang with a little more enthusiasm. This was one of those times where I am pleased that my rational mind prevailed.

As the ambient lights faded, an energy surged through the crowd as evidenced by the deafening pleas for the featured artist, Sara Bareilles, to appear. The electric blue lights illuminating the stage lit a fire inside that began what turned out to be a magical and breathtaking evening. The two hours from my seat in section 202 passed in the blink of an eye, the infusion of inspiration closely guarded and carried with me as I take a leap of my own.

There are singers. There are performers. And there are artists. Sara Bareilles is an artist. She takes the words, lyrics, and melodies of a song, one that you have heard a hundred times before, and transforms them into something new, like a song that you are hearing for the very first time. It’s a brush with genius that words cannot convey. It must be experienced to fully appreciate the significance of its impression. I heard many of my favorite offerings by Sara: Gravity, Chasing The Sun, Brave, King Of Anything. There were two songs, however, that moved me into an unexpected state of enchantment.

For the past eighteen months, Sara has been working on the musical score for a Broadway show set to premiere next year, Waitress. As the opening notes of her song She Used To Be Mine carried towards the ears of her audience, they bypassed the physical senses and headed straight for the soul. A heart-wrenching, introspective, and incredibly powerful love ballad brought tears to my eyes. I don’t even know why it is that those tears materialized. I don’t know that I was either happy or sad. To be honest, I didn’t care. I was just moved. We don’t always need to understand why it is that we feel a particular way. We just need to decide to feel. That is enough. A true artist has the power to kindle that emotional reverberation. With the final note of this spellbinding performance, I came to the realization that I was not alone in my sentiments. In unison, three thousand other fans, connected by a riveting rendition of emotional portrayal, found themselves standing in awe and appreciation. It was a moment, maybe the moment.

Compare where you are to where you want to be, and you’ll get nowhere. ~Sara Bareilles, Uncharted

I have listened to this song time after time: on the radio, on my copy of Kaleidoscope Heart, on my Sara Bareilles Pandora station. It wasn’t until I experienced it live, however, that it finally hit home. Maybe it was the surge of emotion washing over me at this point in the concert. Maybe it was a connection to the fear, doubt, and uncertainty conveyed through the vocal chords of this gifted musician. Whatever it was, I found myself ready to enter uncharted territory of my own.

I won’t go as a passenger, waiting for the road to be laid. Though I may be going down, I’m taking flame over burning out. I’m already out of foolproof ideas, so don’t ask me how to get started. It’s all uncharted. ~Sara Bareilles, Uncharted

Inspire and be inspired. It is my mental anthem, my guiding principle. I have been inspired in a very unique and compelling fashion. I may never grasp the breadth of influence that was provided to me on this special evening. That doesn’t mean, however, that I can’t aspire to inspire the world, one person at a time. It’s all uncharted after all. And that’s what it makes it so incredibly beautiful and wonderful. 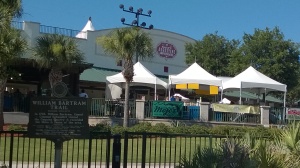 A year after a storied and improbable visit to the World Series, I sat in my seat at Tropicana Field, cheering on my baseball team, the Tampa Bay Rays to a victory against the Kansas City Royals. As fate would have it, the ticket in my possession entitled me to a post-game concert. I had no reason to believe anything remarkable would occur on that evening. That’s the way most special things actually establish their roots.

Despite the poor acoustics of a baseball stadium and my seats a hundred yards from the stage, I found myself moved by the live music. I clearly remember leaving the concert that evening, oblivious to the fact that I was there first and foremost to see a baseball game. Purchasing both albums available by Daughtry at the time, I vividly recall the following morning, driving with my windows down, Starbucks cappuccino in the cup holder, music blaring as I cruise along the shores of St. Petersburg Beach on my way back home. Music has a way of doing that, imprinting indelible memories in our consciousness that resurface when we need them the most. It’s as if musical melodies hold a brush, sweeping strokes of color across our mind, painting a vivid image of our first connection with a song or artist.

Fast forward to the present day and my much anticipated Father’s Day gift courtesy of my son and wife, tickets to see Daughtry in St. Augustine. It is believed by some that anticipation of an event provides more pleasure than the actual encounter. On this occasion, I was giddy before, during, and after the entire experience, primarily on account of the person standing beside me.

In addition to seeing my favorite male artist perform live, I had the privilege of taking my son to his very first rock concert. I could tell by the look in his eyes and the mannerisms of his body prior to the opening song that he wasn’t quite sure what to expect. Although we weren’t in the front row, it felt like it. Seated just five rows back in the pit section, there was an intangible connection between us and the band. We could do more than see their facial expressions. We could feel the emotion. Every smile exuded happiness. Every scowl expressed angst. Every bulging vein conveyed a sense of determination and hope. Rocking my head, bouncing my leg, and belting lyrics from deep inside, I nudged my son and encouraged him to do the same. I understood from personal experience that you can’t force a connection with music. In due time, I knew it would come to fruition.

When I first obtained the latest Daughtry album, Baptized, I played it non-stop in my car. Who am I kidding? I still play it non-stop. But, at that time, there was one song, Battleships, which seemed to come on with an uncanny frequency when my son was in the car. It became our shared anthem of sorts. 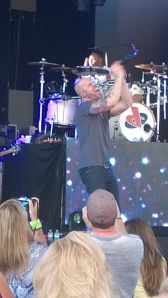 Standing in our spot at that concert venue, awaiting the first chords of the next offering in the set list, we both instantly recognized the signature opening drum beat of the song. And when the first few notes traversed the air and landed upon our ears, the drums thumping in both our hearts, I saw a spark. In the form of a sly grin and a slight, almost imperceptible bounce in his step, he began to sway to the rhythm of the music. As I watched Chris and the rest of the band pour everything into the performance of this song, I saw my son entranced. I enjoyed watching him experience the spellbinding power of live music as much as I did watching the performance itself.

It happens to each of us in our own unique way. Music moves us. In a way that even the most carefully chosen and eloquent words can’t fully express. And the reason I can identify with this particular band so well is twofold. First, the voice, the melody, and the lyrics of each song are captivating. Second, and more importantly, I feel their performance. This is something that cannot be appreciated from a studio recording. It must be experienced live. And when I witnessed the emotion, passion, and energy exerted by this band in the performance of their music, it extended beyond seeing it. I felt it. We both felt it.

If you got a wild heart, don’t you let it die. ~Chris Daughtry

Leaving the venue, heading back to our car, I asked my son whether everything sounded a little muffled. To ease his worried mind, I said “No worries, that’s the way it’s supposed to be.” Holding his hand as we navigated through the crowd, I felt as though we shared another important connection together as father and son, courtesy of some good old fashioned rock and roll music. 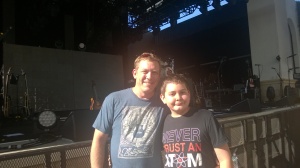 We may not always be in the front row, but that doesn’t mean it can’t feel that way if we allow the music to enter our soul. As true a statement for a rock and roll concert as it is for anything we experience in life. Another indelible memory etched into my heart. And I hope when my son hears a song from this concert played on the radio five years from now, he recalls the same memory that we were fortunate to share together and smile. I know I will.