I sit at the traffic signal, eyes locked on the red light. My left foot is depressing the clutch while my right foot is hovering over the top of the accelerator pedal. With my left hand at the eleven o’clock position on the leather wrapped steering wheel, my right hand caresses the gear shift knob presently in first gear. The tunes are streaming wirelessly from the cell phone in my left pocket and I am perched at the starting line awaiting clearance to launch with the anticipation of a green light.

I have been in this situation many times before. The versatility provided by my car allows me so many choices. I can ease away from a standstill and revel in the low rumble of the engine as the RPM gauge cycles from 1,000 to 3,000 – back and forth through the sequence of gears.

I can punch the accelerator with my right foot while simultaneously releasing pressure on the clutch pedal and accelerate – to a legal speed, of course – faster than most vehicles on the highway. And it’s perhaps what I enjoy doing most, getting where I want to be posthaste, both in my car and in the things I set out to do in life.

I was prepared to do just that on this day when something happened. It’s another reason why I am so protective of the commuting time in my car. It’s like a personal sanctuary for me. Some of my most persuasive and compelling thoughts have come to me while nestled in the cockpit of the driver’s seat.

As the final chords of The Goo Goo Dolls Rebel Beat finished, there was a momentary pause while the software in my phone decided what would be queued up next. Once upon another time.

No, this is not the beginning of a story. This was the song now streaming through my car speakers. The title track off Sara Bareilles’ EP album released in 2012 had been played so many times before. But, on this particular day, it provided me with something different than it had in the past – perspective. There is no logical reason why I heard the lyrics differently on this given day, why I paid them more attention, especially since I was focused on coordination of movements between feet, hands, and brain to accelerate quickly off the starting line. But, that is exactly why I have allowed logic to ride in the backseat more often these days. Situations arrive on our doorstep when we are ready to invite them inside for a visit. Today was that day.

Something about the words resonated with me on this go-around. And I felt compelled to look up the meaning of these lyrics when I arrived into work. In an interview, Sara explained that this title track is really about loss of your childhood and letting go of your past, a part of her journey through life at the time she wrote the song. I sat and thought for a few moments. I was grasping for some connection. I was meant to hear these words in a different light for some reason. I just couldn’t figure out what it was. I had a good childhood. There was nothing I needed to let go from that past. And then, it hit me like a proverbial ton of bricks. There is more than one past. There are an infinite number of pasts that we are creating each and every moment of each and every day. And I did need to let go of one of those to move on towards my next big ambition.

For the past year, I have been publishing short stories to this blog. And it has been extremely gratifying – to tell stories, to share emotions, to welcome everyone who chooses to read them into my small corner of the world. It has become comfortable – like a warm blanket on a cold winter night. But, it is time for me to toss the comfy blanket aside and embrace the chilly air of doubt and uncertainty. You see, I have been encouraged, nudged – and eventually now – persuaded towards publishing some of my stories. I have a sense that it is going to require a fair amount of time, work, and growing pains to reach this ambition. But, as Rafiki proclaims in The Lion King, “It is time.”

Here I was, all ready to accelerate to 60 mph as quickly as I could, and instead I ease from one gear to the next as the captivating sounds of the harmonium echo in my ears. I am not going anywhere from a writing sense. In fact, I will probably be writing as many stories, if not more, than what I was writing before. But, they will now be in anticipation of publication in a book as well as on my blog.

Many of the stories that I have previously published on this blog will be made accessible, in the near future, via Amazon in e-book format. Check if one of your favorites is slated for release through the new Short Stories menu on the home page of my blog. If your favorite isn’t there, let me know and I will add it to my next wave of short stories to be published in e-book format. Each of the stories will be provided in their entirety with a short passage provided by me detailing the inspiration behind the story. 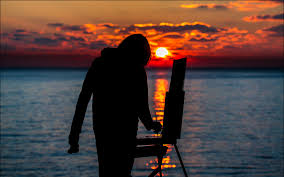 In addition, I will be releasing a new short story series titled Impression exclusively on Amazon. As a humble way of showing my appreciation for everyone who has read and commented on my stories to date, this new short story will be available to download for free during the initial days after release.

I will still be a regular contributor in the blogosphere – perhaps just in a different capacity now. I am not exiting the highway, I am simply changing lanes. I am shifting gears so that I can accelerate towards the next step on my own journey as an author. It’s a difficult decision for me, more than you could probably imagine. I have had this draft sitting on my computer and in the back of my mind for several weeks. Although things never seem to be black and white – except for my car, of course – the perspective provided by each situation helps us to discern the various shades of gray in between the two extremes. And even though it may not be easy or comfortable, it’s the process of choosing one of those shades of gray that adds depth to our perspective, and growth to our lives.